In 1970, Robert Mager and Peter Pipe developed a model to aid in the analysis of performance. The model is designed to help troubleshoot performance problems rather than provide a comprehensive analysis perspective (Rothwell, Hohne, King, 2007). It is simplistic and designed like a flowchart with decision points to guide you through the analysis. This simplicity makes the Mager and Pipe model extremely powerful (Rothwell, Hohne, King, 2007). It easily goes through a systematic process to address a performance problem.

The model begins with the discovery of a problem. The problem needs to be measureable and observable so as to expose a performance gap. Furthermore, the problem/gap needs to be clearly described so that a proper solution can be implemented. Someone once wisely said, “A problem well stated is a problem half solved” (Allan, Reynolds, p.83, 1983).Once a problem/gap is recognized the HPT practitioner can go through a series of questions to find the right solution to the performance gap or problem (Rothwell, Hohne, King, 2007).

The first and perhaps most important question is whether the performance problem is worth solving. If so, you can then proceed to answer further questions on the flowchart such as whether there are clear expectations, adequate resources, is poor performance rewarded, etc… Interestingly, the last step on the flowchart is to implement training. As the flowchart shows, training should be one of the last interventions an HPT practitioner should consider as it is usually the most expensive. Cheaper alternatives, such as clarifying expectations or simplifying a task, can achieve the desired corrective to the problem/gap.

Due to its simplicity, the Mager and Pipe model is an extremely useful model to use when attempting to address performance problems. It provides a HPT practitioner, “A framework for systematic problem solving which minimizes costly misjudgments and serves to guide both manager and employee toward successful resolution of performance problems.” (Allan, Reynolds, p. 88, 1983) 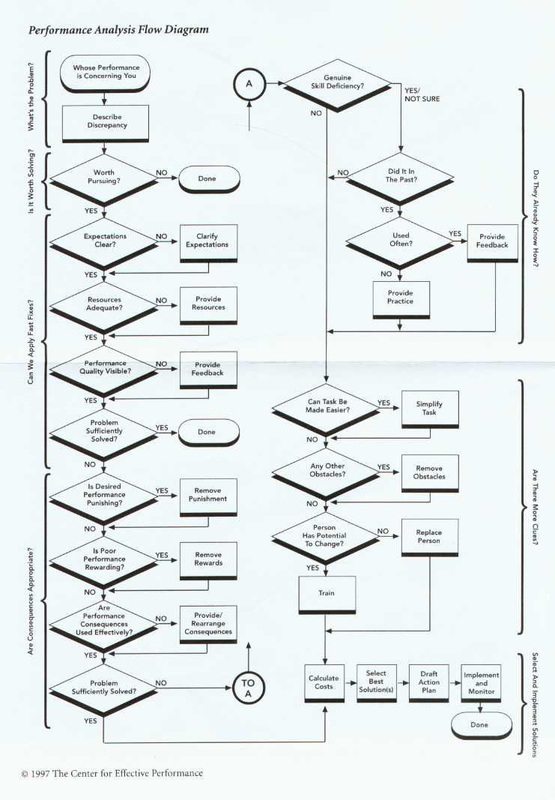