Thomas F. Gilbert developed the Behavior Engineering Model in 1978 in his book, Human Competence: Engineering Worthy Performance. Gilbert, who is known as “the father of performance technology,” developed the BEM through applying his understanding of technological improvement to humans.

Gilbert developed the BEM with the belief that the greatest barrier to worthy performance comes from a lack of information and support by management rather than an individual’s lack of desire to perform well.

Gilbert’s BEM consists of three Leisurely Theorems that:
1.     Distinguish between accomplishment and behavior to define worthy performance
2.     Identify methods for determining the potential for improvement (PIP)
3.     Describe six components of behavior that can be manipulated to change performance

Gilbert’s model focuses on two distinct factors of performance—the environment and the individual’s behaviors—which can be viewed from three perspectives—information, instrumentation, and motivation.

The BEM uses these factors and components to diagnose possible influences on behavior and identify strategies for performance improvement. 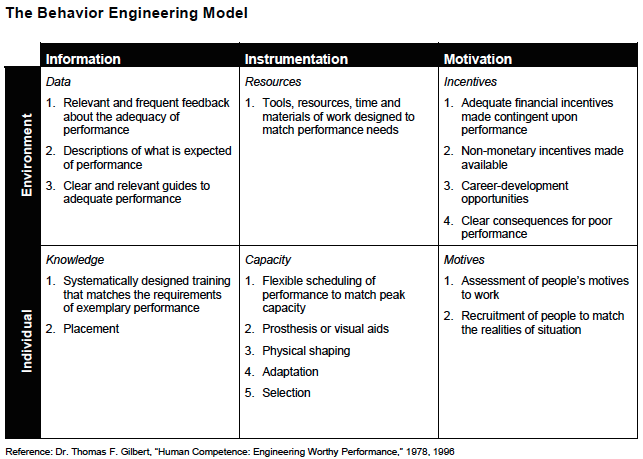